On this page you will find several resources and links regarding Reverend Richard Johnson
and the first Christian service in Australia. 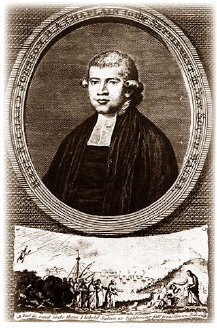 "Woodlands" (Tell out my soul):

"The Lord who sends thee hence will be thine aid:
In vain at thee the lion Danger roars;
His arm and love shall keep thee undismayed
On tempest toss-ed seas, and savage shores.
"Go, bear the Saviour's name to lands unknown,
Tell to the southern world his wondrous grace;
And energy Divine thy words shall own
And draw their untaught hearts to seek his face.
"Many in quest of gold or empty fame
Would compass earth, or venture near the poles:
But how much nobler thy reward and aim
To spread his praise and win immortal souls."
An address to the inhabitants of the colonies by Richard Johnson
Read what Richard Johnson wrote to those under his care in 1792.
read online >>>
An account of the first Christian service in Australia
Read this account of the first service held on Australian soil.
read as PDF >>>
read as PDF >>>
(c) 2019 Christian History Research
What Rev Johnson wrote before accepting his position
read as PDF >>>
Read what Richard Johnson wrote before he accepted the role of Chaplain
to the colonies.

Thirty Second Radio CSA's
To be aired during the year.
To be played the week prior to the First Sunday in February
A speech by Dr Graham McLennan on the 226th anniversary
Read the speech by following this link.
read now >>>
Podcasts on Richard Johnson
Listen to this podcast on Australia's First Minister Richard Johnson and the First Christian Service on Australian Soil.
listen now >>>
Richard Johnson: Dr Graham McLennan Interviewed by Neil Johnson
Listen to the full 45min interview on Richard Johnson and National Christian Heritage Sunday.
listen now >>>